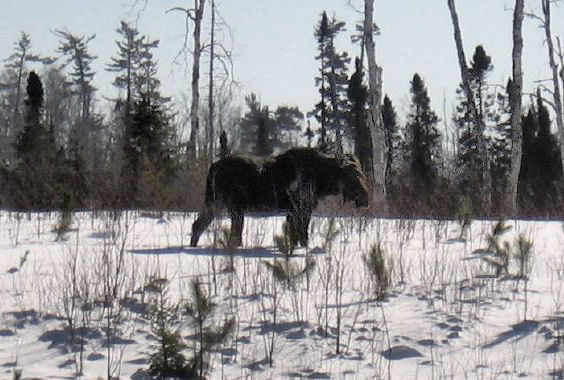 Everybody loves to see a moose.  The most well-read blog entry we’ve ever published continues to be Moose – vs – Andy McDonnell  (https://bearskin.wordpress.com/2007/10/28/moose-vs-andy-mcdonnell/)   For some reason, people are very taken with Andy’s story.  Numerous guests have told us that they would greatly enjoy being chased by that same bull moose.  It is undoubtedly more fun to retell a story about a charging moose than to actually live the story.

Skiers at Bearskin come back from the trails enthused about finding moose tracks (very, very common) and absolutely overjoyed when they actually spot a moose (not so common.)  This moose in the above picture was sighted yesterday on Bear Cub Trail by guest Jim Zyskowski while he was out skiing.

So anyone who appreciates seeing moose will find this StarTribune article, The Case of the Missing Moose, to be informative.  http://www.startribune.com/local/15895882.html   Thirty-four moose were tagged and radio-collared last week as part of a project to examine whether brainworm is affecting moose in the area.  The close-up pictures in the slide show of vets taking the blood samples from an 850 pound cow moose and then placing a radio collar on her are especially remarkable. Very few of us will ever get that close to a giant moose head.

Now we’ll not only want to see a moose out on the trail, but it will also be intriguing to see if we ever spot one that is part of this study.

● Moose -vs- Andy McDonnell
● The Good Life, or something like that...
● Bad Day for Birds and Suckers
● Survivor, the Power Outage Edition
● Bear vs. Dumpster, Score1 for the Bear
● A Life Well-Lived
● Dear Bearskin
● Bear vs. Dumpster, Round 2
● Best Bear Picture Ever
● Rent-A-Moose
● Rant-A-Moose
● A Disconcerting Afternoon
● Chase the Northern Lights at Bearskin Lodge
● Memories of a Fire, 9 Years Later
%d bloggers like this: