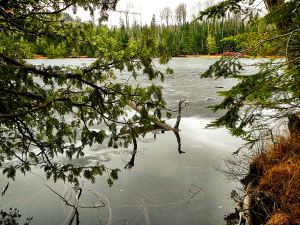 We’d better get the annual “ice-out” guessing game going ….  before the ice on East Bearskin Lake is gone.

We never know quite what to expect for March and April weather at Bearskin Lodge.  Groomers have been out on the ski trails as late as April 17, and it is typical for the ice to finally disappear from our lake between May 4th – 8th.  Check our Flickr and Facebook pages for March and April in past years, and you’ll find far too many pictures and posts about spring snow storms and endless winters.

But every once in a while a sudden spring surprises us. In 2010 the snow abruptly melted around March 6th, and the ice went off the lake by an all-time early date, April 3rd. Our snow lasted a bit longer in 2012, but take a look at these pictures of the East Bearskin Lake ice taken today.  Examine them carefully, and then make your best guess for an ice-out date. This may not be the ideal year to take weeks agonizing over your date choice!

Here’s some info about previous spring ice-out dates:  https://bearskin.wordpress.com/2011/04/30/make-a-guess-on-the-ice-out-date-for-east-bearskin-lake-no-august-guesses-allowed/   Last year we were joking about summer ice-fishing and had several guesses of potential ice-out dates in mid-summer.  We think we can guarantee that an August guess this year will be wrong.  Pfffffft.

You can post your forecast in the comments section here, or on Bearskin’s Facebook site. If neither of those venues suit your communication style, just e-mail your guess to: stay@bearskin.com  To make it fair, your guess needs to have come in at least 5 (no, this year better make that 3!) days before the actual date. We’ll consider that the game has no winner if we can’t get a guess that’s within at least 2 weeks of the right answer. @@  Especially this year!

The unexpected early melting is probably Bob’s fault.  Ever since last year he has been planning to build our new big dock on the ice during the last week in March, 2012. Should have worked; Gunflint built a new dock on ice on the same schedule last year.  But suffice it to say, our dock building is happening much sooner and involves a lot more splashing through water than was ever originally intended. More on that story later.

8 thoughts on “Guess the ice out date, before it’s too late |Archive of 2012 contest and past info”