It’s “ice-out” time already, so once again we’ll be taking guesses on the date that you think the ice will be gone from East Bearskin Lake.  The 12th annual East Bearskin Lake ice-out guessing game begins now.

We always like to help you make an educated guess because that’s much more fun than just randomly picking a date; so here’s all the data you need to win a Bearskin T-shirt or a complimentary canoe rental from Bearskin Wilderness Outfitters.

If you’ve done your research and you’re ready to guess, add a comment on this blog or go to the Bearskin Facebook page and add your answer there. (It’s easier to scope out what others have guessed on Facebook!)  You’ll need the date, and as a tie-breaker, your estimated time.

First important piece of information: forget those balmy temps you probably have been experiencing at home. It is 100% still winter on the Gunflint Trail, and it has been since the first week of November. Are we tired of snow and ice yet? Yes, indeed, very much so.  Here’s the Lodge today.  This is not just the new snow of the recent snowstorm, it’s snow that has been on the ground since November 7th:

Your next clue, the webcam today. There’s not even a hint of clear ice yet:

Clue #3 is the ice depth at this point in the season.  Landen went out to drill some holes and reported that there is about 8 inches of crumbling ice on top of at least 8 more inches of rock solid ice.  All of it is covered by a great deal of snow.  There is a theory on the Gunflint Trail that because snow fell early on the newly forming ice that perhaps the ice was insulated and as a result, not as much ice formed. Maybe, but that might be more true on the bigger lakes that freeze later.  You can toss the idea into your calculations.

Your last clue to consider is the upcoming forecast.  Don’t expect many balmy days to speed this process along.  Rain and wind, though, can sometimes have an impact. 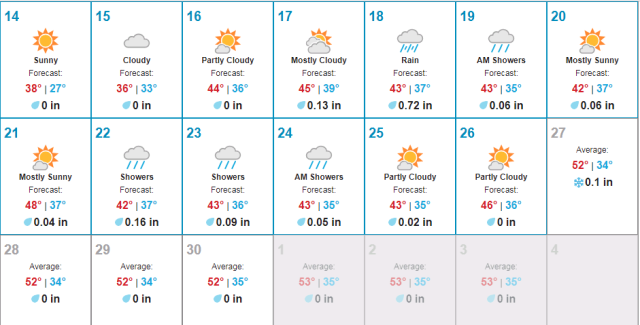 So when does the ice usually go out?  Once it went out in March. That ship has sailed for 2019. April ice-out has happened, but only an extreme optimist would have high hopes for that this year. May 6th – 8th are common dates, but we have also had several years recently when the ice was not out for the fishing opener. The latest ice-out date in our experience was May 16, although we’ve heard stories about Memorial Weekend dates. We invariably have a few people who guess July or August ice-out dates, and we’re happy to report that they’ve never been right. So far.

Here is a video of the ice going out last year on May 7th:

If you’re serious about your research, check out past ice-out blog posts.  Here is the post from last year, including a good summary and picture from past blogs:

And here are many others ice-out blogs from the past decade. Lots of info here:

HOW TO ENTER:  If you’ve done your research and you’re ready to guess, add a comment on this blog or go to the Bearskin Facebook page and add your answer there. (It’s easier to scope out what others have guessed on Facebook!)  You’ll need the date, and as a tie-breaker, your estimated time.  Winner receives a Bearskin T-shirt or a complimentary canoe rental for a day (this canoe be used as one of several days if you’re renting canoes for a BWCA trip.) Good luck! Watch the ice go out on the webcam here.